Hogarth Worldwide, part of the WPP Group, implements international advertising campaigns in print, television or digital media. The company is currently undergoing a global expansion, hence the creation of the two 7.1 Dolby studios.

Both studios boast fully isolated control rooms and voice recording booths and were designed by acoustic specialist Whitemark. In a “you couldn’t make it up” moment the studios were constructed in teak, yep its true. 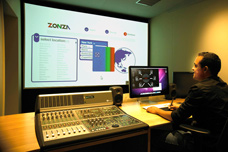