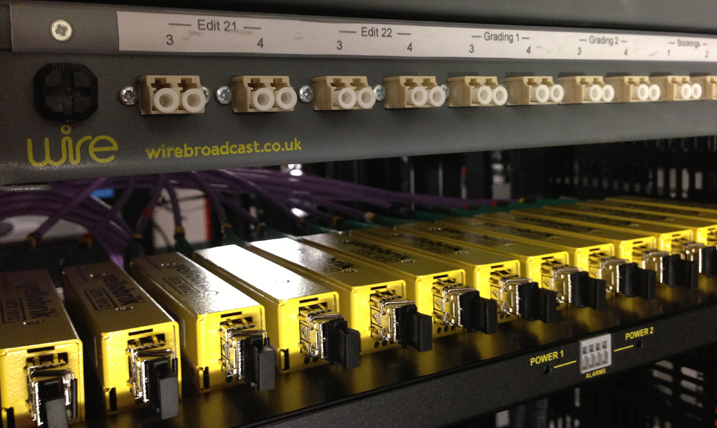 13th May 2013 – Technical installation company Wire Broadcast has installed Series 5000 and yellobrik interface and glueware solutions from LYNX Technik AG for The Farm Group’s fifth central London facility, known as ‘William’. The new site is located at William Blake House in Marshall Street (hence the name) and is set to house over 40 operational spaces. The installation, being undertaken by Wire Broadcast which has worked on all four previous Farm Group sites, will comprise offline and online edit suites, grading theatres, sound studios and tracklay.

‘William’ covers over 20,000 square feet and presented Wire with a few challenges for signal routing. Robin Howell, Director of Wire, explains: “The building is engineered as file-based end to end. Conventional base band video was restricted to just the return monitoring of the edit or sound system. By using the Lynx Technik yellobrik HD-SDI to HDMI convertor on this return we were able to feed video to the main monitor, audio to the audio monitoring and HDMI for client viewing, all from a single device. Crucially we were also able to switch to a single-core fibre based input on those runs that exceeded the limits of 3G video cable.”

Clive Haydon of Lynx Technik said: “It has been a pleasure to work with the Wire Broadcast team on The Farm Group’s William project. Lynx Technik solutions continues to prove itself as reliable and able to provide feature-rich products to address a wide range of conversion and signal processing challenges. The powerful features of the yellobrik and Series 5000 solutions have provided The Farm Group with a number of capabilities for its fibre and conversion requirements.”

‘William’ is due to be ready and open for business later this month.

Posted on May 16, 2013 by Robin
Tags broadcast design and installation, The Farm Group, William